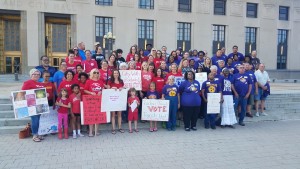 SEIU and MNEA members join education & community activists at a press conference at the Courthouse.[/caption]

Local 205 did major work this year in Nashville to prepare for a budget showdown we predicted would happen when elected officials narrowly rejected adjusting the property tax rate in 2018.

Our members held town hall meetings, spoke to their friends, family, clergy, elected officials, and the media to educate them about how the government is funded and that Nashville’s financial struggles are not because of spending but because of a failure to capture the city’s explosive growth and prosperity.

When Mayor David Briley proposed a “no new taxes” budget, it was almost a guarantee that the city would not have enough revenue to properly fund the Metro school system (SEIU members work as support staff in MNPS and are among the lowest-paid public employees in Davidson County). While there was a substitute budget that was proposed to replace Briley’s, that budget failed to pass by one vote. This is the same thing that happened last year. As a result, the Metro School system remains underfunded by tens of millions of dollars and school employees again wonder how they are going to afford to live in Davidson County while housing costs are skyrocketing.

“We believe that in the court of public opinion, we have convinced most people that Nashville’s budget problems are the result of low revenues, not excessive spending and that the solution was to adjust the property tax rate,” said Brad Rayson, Local 205’s president. "In the end, though, this was an election year and we still just did not have enough council members who were brave enough to take the tough votes and do what is right for the city. We will be factoring that in to our decisions on who we support in this year’s Metro elections”.

Despite this setback, city employees did get raises and other improvements in the 2019-2020 budget, including --