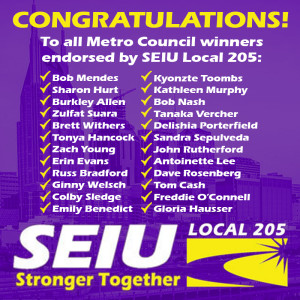 Of the 30 Metro Council candidates endorsed by SEIU Local 205 in the 2019 local elections, 24 of them won their races. In addition, four of the five countywide At-Large winners were SEIU endorsed.

For two years, Local 205 has been focused on fixing the underlying revenue problem in the Metro budget. Last year, 20 Council members voted to correct the property tax rate to make much-needed investments in city schools, infrastructure and public safety. 13 of those people were on the ballot this year, and every one of them was elected again by the voters, including the top three vote getters for the At-Large positions

Once again, SEIU's members were the key to making several of the candidates' victories possible. Nearly two dozen members volunteered to knock doors in a collaborative effort to reach over 12,000 voters.