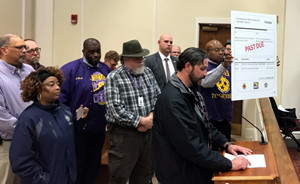 City employees and allies deliver a "past due invoice" for unpaid raises to the Metro Council.[/caption]

Members of the Service Employees International Union (SEIU), the International Association of Firefighters (IAFF), and the Fraternal Order of Police (FOP), presented the Metro Council with an “invoice” of $38 million, which the public sector unions say would make city employees whole after the Council reneged on a pay plan which included cost-of-living adjustments (COLAs) in 2018 and 2019.

The General Government employee pay plan, which was developed after two years of study, was approved by the Metro Civil Service Commission and passed the Council by a vote of 34-1 in June, 2017. But last May, the mayor’s budget did not include the cost of living raises that were included in that pay plan, forcing the Council to write new ordinances that undid their previous vote on the pay plan.

Check out the complete video of the event.

The following remarks were made during the public comment period by Richard Tippit, a Metro employee who helped present the invoice to Metro Council members:

We’re here tonight to deliver you an invoice for services performed by the employees of Nashville Metro Government. In July of 2017, this Council passed a three-year pay plan that included annual cost of living adjustments. This pay plan was largely seen as attempting to make up for sacrifices made by Metro employees throughout the Great Recession.

Last year, because of a self-inflicted funding problem, this Council decided it wasn’t going to pay all of its bills. You paid every other bill - you even took on new bills - but you forgot to pay one of the most important. The men and women who keep the parks clean, keep our water running, keep the libraries open, repair our roads, pick-up our trash, answer 911 calls, put out the fires and keep our communities safe are owed a 3% cost of living adjustment for last year and a 3% adjustment for this year.

The total balance due is approximately $38 million in total, $18 million of that is past due. As you begin to discuss this year’s budget, you should know this bill remains unpaid, and your budgeting should start there.  Thank you.