A packed house at the "Liberty & Justice For All" forum on the UT campus.[/caption]

SEIU members were there to lend their support and expertise to the new non-profit, non-partisan organization ACT-East Tennessee Strong United as it hosted its "Liberty and Justice For All" issues forum in Cox Auditorium on UT's main campus.

The forum was attended by hundreds of citizens and students across East Tennessee as well as political candidates running for state and federal office, including gubernatorial candidate Karl Dean.

Jenna Rasnic, an ER nurse and union leader at Methodist Medical Center in Oak Ridge, was one of the presenters at the forum. She spoke from a healthcare perspective about the opioid epidemic that is tearing whole communities apart. Jenna has been active with ACT since its formation. “I never thought of myself as a leader, but through my involvement in our union and ACT is see that I can be,” she said.

Tracy Fair, a unit secretary and union steward at Methodist was also in attendance. “The most inspiring thing to me was looking at how committed the members of this organization were and their belief that they will and can make a true difference,” Tracy says. 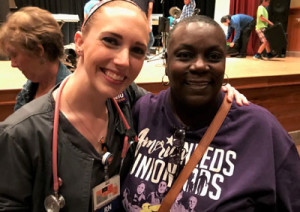 When the candidates in attendance who are running for state Senate, state House, Congress, and Governor were asked to support the group's platform if elected, all said 'yes'.

Many thought that the highlight of the day was a moving sermon by Father Bryant Stewart. “It set my heart singing when he did his call and response saying 'I will vote'," Jenna said. “My voice is pretty darn loud, but I got drowned out in the sea of voices! We were a deafening force.”

ACT-East Tennessee plans to continue meeting regularly on the fourth Thursday of each month. Find out more about them at their website or on their Facebook page.