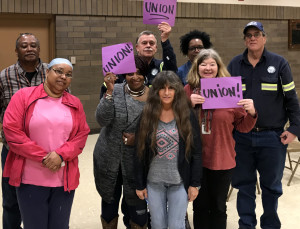 In FY 2018, the city of Chattanooga saw a revenue increase of 3.39% and maintained the current property tax rate. Despite reductions in state revenue, Chattanooga was still able to increase salaries, benefits, and properly fund the pension plan.

City employees received a 2.5% across-the-board increase in pay (or $1250 whichever is greater). There was a slight increase in the insurance costs to those employees who chose to stay in the "P" Plan, however if one chose to move into the "S" plan then there was an actual cost decrease of approximately $20 (for family and all other things being equal).

Thanks to a productive working relationship between the city and the Union—including the pressure that SEIU members have been applying at city council, approximately $1.3 million has been earmarked for pay adjustments and the establishment of a step system of some kind within the city’s compensation plan.  A pay study to be conducted by MTAS (estimated to cost about $75k) will also be funded to study all job classifications and work toward establishing step increases and a more robust pay plan.  (the results of this study will be used by a join Labor/Management committee to establish a path forward on pay and how to use the earmarked money to move existing members pay closer to where they should be based on longevity and other considerations).

Updates to the Employee Information Guide

SEIU is also meeting with the city officials to make updates and modifications to the Employee Information Guide related to call-in pay, on-call pay, inclement weather policy, overtime and holiday pay policy and other important issues. More information on EIG discussions will be distributed to the membership over the next few weeks.