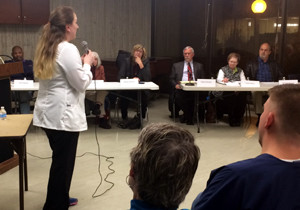 The Workers Rights Board of East Tennessee issued a "summary report of findings" after hearing testimony from hospital staff working at Methodist Medical Center. A capacity crowd of nearly a hundred filled the Oak Ridge Civic Center at the event, which was sponsored by the local Jobs With Justice and Interfaith Worker Justice organizations.

Gloria Johnson, a former state representative and schoolteacher, was one of the Board members who heard testimony about working conditions at Methodist. “The hospital has to make a budget and so do these employees and their families,” Johnson said. “It’s outrageous that Covenant Healthcare has dragged this process on for months in an attempt to wear down their employees.”

Some of the findings from the Workers Rights Board include:

The Board was also concerned about Methodist’s proposal for a two-tiered wage system which would lower the pay scale for new hires. “Our collective experience with two tier wages is that such schemes create more issues than they solve including the adverse impact on overall morale and teamwork in the workplace [and] the likely pressure to reduce the top tier pay over time rather than raise the lower tier,” the Board wrote.

The Workers Rights Board is a public forum where workers can bring complaints against employers for violating their human and legal rights in the workplace. The Board is drawn from a broad spectrum of community leaders and can intervene with employers and the public to help resolve situations that threaten workers’ rights. Members of the Workers Rights Board of East Tennessee include a doctor, a nurse, an attorney, local labor officials, and several past and present elected officials.

The union contract at Methodist Medical Center - which covers over 800 nurses and support personnel - expired in October but was extended by mutual agreement. The acute care hospital is part of the Covenant hospital chain. SEIU has represented employees at Methodist since 1966. The key issues still separating the parties include:

“This is a great hospital and we want to maintain that,” said Sondra Bryant, a registered nurse who has worked at Methodist for 17 years. “Our goal in these negotiations has been to keep quality care, safe staffing ratios and the valuable experience of employees.”

"As a single parent and the primary care giver for my boys, MMC's proposals have made my family's life extremely difficult with their mandatory scheduling," said Brandon Sampsel, an R.N. "I do not believe that being a good parent and a good employee should be at odds with each other. But that is the impact their proposals are having on us."

The current extended agreement between Local 205 and Methodist runs through February 7, 2018.  The parties are negotiating on February 5th.