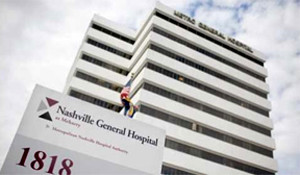 Less than 48 hours after Nashville’s Metro Council passed a bill to fund a new professional soccer stadium to the tune of tens of millions of dollars, Mayor Megan Barry announced in a press conference that Nashville General Hospital would be moving to a new model of care that did not include inpatient services. The announcement caught elected officials, hospital administrators, SEIU, and even the mayor’s own staff by surprise. Local print and broadcast media reported for nearly a week on how local workers, politicians, and healthcare professionals felt blindsided by the mayor’s office, how the announcement has led to a staffing crisis, and how the administration has only produced questions and no answers about why such a radical change is necessary. General is becoming more efficient and actually generates revenue for the city.

Several days later, at a meeting of the Hospital Authority, tensions ramped up as hundreds of SEIU members, clergy, patients, and allies of the hospital packed the board room. SEIU’s chief steward at the hospital, Vanessa Robertson-Sanders, presented over 500 petition signatures to the board as she and other members spoke passionately in defense of keeping General intact as a safety-net hospital so that it can continue to fulfill its mission. Media reports revealed that later that night, after the board went into a closed “executive session,” one of the mayor’s appointees to the board resigned and the mayor herself issued a letter of apology about the manner in which her own announcement was handled. She did not, however, indicate that she was willing to change her mind about downsizing General Hospital.

After hearing the public outcry, the Metro Council called a meeting to ask questions from the community about what a shakeup at General would mean. SEIU was one of four stakeholders invited to present information to the council. Dozens of union members turned out and helped fill the council chamber to capacity while photos of hospital staff who could face layoffs played in the background. Others, including the hospital’s CEO Dr. Joseph Webb and sheriff Daron Hall made comments that shocked council members. For one, the sheriff’s office would need to add around $3 million in their budget to handle inmate care. But the biggest surprise was that the proposed overhaul would likely remove General’s designation as a “safety net hospital”, which means that the state of Tennessee could lose approximately $50 million in federal funding (as well as an additional $20 million from the Feds to administer TennCare) that goes to provide indigent care. The mayor’s proposal for an “indigent care fund” which she says would be distributed to other area hospitals to cover uncompensated care would not even come close to covering the new patients that those facilities would see come through their doors if General downsized.

While the mayor’s office has reached out to SEIU for discussions, our message has been consistent: We must keep General Hospital a hospital. General needs to be given adequate time to implement its plan to continue in-patient services and continue as a safety net hospital.

The stakes here aren’t just the hundreds of SEIU members and their families whose livelihood could be affected. The entire Nashville community would be negatively impacted, as would the rest of Tennessee’s safety-net hospitals in Memphis, Chattanooga, Jackson, and other parts of the state.