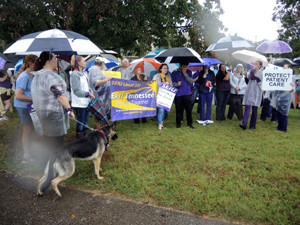 Members of SEIU Local 205 have voted to reject Methodist Medical Center’s contract proposal. The vote came after the hospital gave the union its final proposal last Friday. The current contract expired October 10th but had been extended through November 15th by mutual agreement.

Among the key issues separating the parties were the union’s goal of maintaining safe staffing levels and reasonable working hours; Methodist’s plan to slash wages for new employees; and the union’s call for affordable health insurance on par with other Covenant facilities.

Union members were primarily concerned about what Methodist’s proposal for lower wages would mean for patient care.

“We regularly get ‘short staffing reports’ from nurses noting that our established patient to staff ratios have been exceeded,” said Sarah Englehardt, a licensed practical nurse. “Having enough staff to provide the best care is just common sense.”

“Methodist claims they have a hard time recruiting nurses now, so we can’t see how cutting pay will make that easier”, said Linda Mabry, a registered nurse.

“This was not just about the current workforce at Methodist, but also the next generation of MMC workers,” said Dustin Whalen, unit secretary. “Methodist’s wage proposal would cut incoming nurses’ pay by up to $5.00/hr. Other new employees would face similar cuts. Some staff would start at less than $10.00/hr.”

Union members had already voted to authorize their bargaining committee to give the hospital a notice of intent to strike if an agreement could not be reached. Under federal labor law, the Union must give the hospital ten days’ notice before striking.

SEIU officials will be reaching out to the hospital about getting back to the bargaining table in order to avoid a strike. “We are ready and willing to reach an agreement, but it has to be one that protects our patients, respects our community, and meets our needs,” concluded Sondra Bryant, registered nurse. “But make no mistake – our members are more united and determined than we have seen in years.”

SEIU has represented employees at the Oak Ridge acute care hospital since 1966. Currently there are over 800 employees covered by the union contract.

UPDATE: The current contract has been extended by mutual agreement until January 10, 2018. Negotiations are scheduled to resume right after the new year.