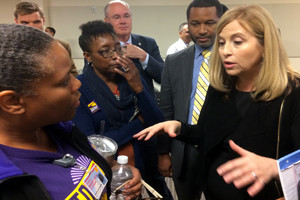 Union leaders confront Mayor Megan Barry after the surprise announcement from Meharry & HCA that could lead to cuts in jobs and patient services at General Hospital.[/caption]

With no warning to SEIU, to council members, or to hospital officials, Meharry and HCA executives along with Mayor Megan Barry announced a plan right before Veterans Day weekend which will have a major impact on General Hospital staff and the services the hospital provides to patients in the Nashville community.

According to various news reports, Meharry Medical College, which has been a long time partner with General, will begin a new merger with Southern Hills hospital, which will lead to phasing out General’s inpatient services. This move will affect not just jobs at General Hospital, but also indigent care for many of Nashville's most economically disadvantaged citizens.

The Tennessean, Nashville Public Radio, and NewsChannel 5 have coverage of the press conference, but there are still some major questions that remain. These questions will continue to be asked by SEIU and our partners in the community and elected officials.

SEIU Local 205 has issued the following statement to all General Hospital employees:

"Our Union will be meeting shortly with the Barry administration to get more details on what their plans are and what they think the future of General looks like. We will be educating and organizing our partners in the community and in politics to gather allies to make sure our jobs and services are protected. We encourage all staff to stay calm, to talk to your Union Steward to get news updates, and do not make any drastic moves towards your career until we have more information. Also, TALK to your family, friends, co-workers, and preachers about how important General is to us and the community we serve."