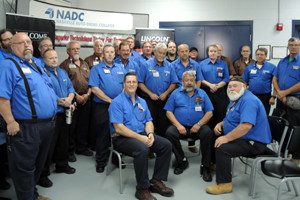 What used to be called “Nashville Auto Diesel College” was a family-owned college that was founded in 1919. NADC was bought by a corporation in 2003 and is now known as Lincoln College of Technology.

SEIU Local 205 represents instructors at Lincoln and their role is to educate and prepare students for a career path of their choice in the automotive repair industry.

Before the takeover by Lincoln, instructors were faced with aggressive and unethical practices by management forcing them to work long hours and making it a stressful and unfulfilling workplace. In 2000, instructors came together and decided they needed representation in order to make the changes on the job they wanted to see. SEIU Local 205 was there to help and stood with the instructors as they made their stand and conducted a two-week strike to get Management to the bargaining table. With this act of solidarity, the instructors demonstrated that Management’s hardball tactics were not going to be tolerated.

The negotiating team worked hard on the first union contract, which among other things guaranteed strong wages and benefits, job security, and a process to hold Management accountable. Internally, the union leadership at Lincoln has been consistent about meetings and receiving training from Local 205 on how to build power and get good results for the membership. “The main goals that our union stewards focus on is to train and to keep the membership posted on updates,” says Lyman Parsell, chief steward at Lincoln. "Training and communication has also been very helpful in dealing with representation in times of trouble."