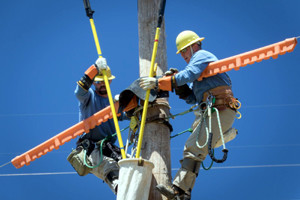 Along with the team competition, two NES linemen outshined everyone else during their solo events. SEIU member Tommy Barksdale won first place as an individual journey lineman out of 40 participants and member Michael Shannon won first overall as an apprentice lineman out of 102 competing.

“It makes me proud to know that I can stand with the best from across the state and say that I won,” said Barksdale. “During practice we strive to think outside the box to come up with different strategies to give us the edge. We watch and compete with other linemen from NES during practice to try and push ourselves to the next level both on the job and in competition.” “It takes time and skill to perfect the art of climbing and being able to work efficiently,” said Shannon. “I’ve had the privilege to be pushed by the guys on the team which helped me excel, and I’m extremely thankful for the opportunity to achieve such an honor.”