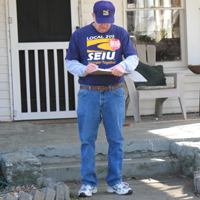 In the 2017 Chattanooga City Council election, all of the Union’s endorsed candidates won their races in the general election. However, two candidates, Chris Anderson and Yusuf Hakeem, did not reach the 50% + 1 threshold needed to win the overall district election. Despite those two losses, their opponents were also union advocates. This means that there is still a pro-union majority on the Chattanooga city council, which complements mayor Andy Berke’s overwhelming re-election victory.

SEIU members were able to maintain this union majority by providing 237 volunteer hours, knocking on 1,158 doors, and making over 500 phone calls!

Congratulations to the candidates and to our members who made the difference and helped them win on Election Day!