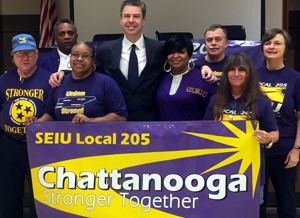 Berke has served four years as Chattanooga’s mayor as the city saw major growth and progress on multiple fronts, including for city employees. Berke was the first mayor to recognize a union for general government employees by signing a memorandum of understanding with SEIU, he’s worked with union members to develop an employee policy manual that is consistent across all city departments, and he has continued to meet in good faith with local labor organizations to ensure equal and fair treatment for all city employees.

“Andy Berke is one of the most pro-worker mayors I’ve seen in a long time and we’re proud to continue supporting him,” said union member Blondel Garner, a Head Start teaching assistant who has worked for the city for over 20 years. “Andy knows how to treat people and he knows how to make our city successful.”

“I respect Andy Berke because he respects people who work for a living,” said Greg Hinton, a building maintenance mechanic. “We are not going to find another candidate for mayor who is as committed to workers and making Chattanooga great as Andy Berke is… he’s already proven it.”

“We look forward to continuing to deepen our relationship with Andy by creating more efficient and productive ways to address employees concerns and issues,” said Brad Rayson, president of SEIU Local 205.

Election Day is on March 7, 2017 and early voting begins on February 15. Complete information on early voting dates and voting locations is available from the Hamilton County Election Commission at 423-493-5100.

SEIU Local 205 represents thousands of public service and healthcare workers across the state of Tennessee, including employees of the City of Chattanooga.