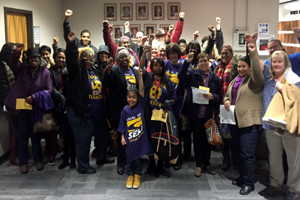 Dozens of SEIU members working in Metro schools ask the district to do a pay study for school support staff. The union presented over 1,200 signatures from MNPS workers.[/caption]

Food service workers, paraprofessionals, secretaries, and dozens of Metro Nashville Public Schools support employees crowded into the December school board meeting to urge the board to commission a pay study for support employees.

SEIU Local 205 gathered over 1,200 petition signatures from support staff working in schools all over Davidson County. The petition requests that a pay study be conducted to compare MNPS support staff’s wages and benefits to their counterparts in peer cities and updating the pay scale where appropriate. There has not been a pay study conducted for support employees in Metro Schools since 1996.

"We appreciate Dr. Joseph’s willingness to review school operations from top to bottom and make changes that are needed," said Lilldeus Russell, a paraprofessional who works with special needs students. "One of the changes we think is necessary is to take a hard look at employee pay and whether it is keeping pace with the cost of living in Nashville."

James Brown, an IT technician who was part of the petition drive, has noticed a slow trickle of quality employees out of MNPS. “We have seen good people with years of experience leave the district because they can’t make ends meet,” Brown said. “That’s a major loss – not just to the school district but to the kids who rely on us every day.”

"Since the last pay study, so much has changed,” said Brad Rayson, president of SEIU Local 205.”The cost of living has gone up, job expectations have grown, and student needs have increased.”

Rayson urged the school board to immediately commission a pay study to compare support staff wages to their counterparts in similar-sized cities like Louisville and Charlotte. “We need an apples-to-apples view of where MNPS stacks up and take action to make improvements as quickly as possible,” Rayson said. "Our members love their work and find it very rewarding, but some struggle financially. Many have second jobs and others have to consider leaving a job they love for one that simply pays the bills.”

SEIU has had preliminary discussions about low pay for support staff with Dr. Joseph and plans to address the topic with him in more detail in January.