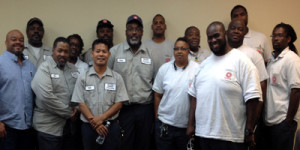 Union stewards for the MDHA chapter of Local 205.[/caption]

For nearly three years, employees at the Metropolitan Development & Housing Agency (MDHA) in Nashville went without cost-of-living raises even though they were asked to do more with less thanks to several factors including a dip in Federal funding for the agency.

But thanks to solidarity along with a strategic plan that involved meetings with agency officials, board members, and local politicians, Local 205 was able to win a 3% wage increase in September.

“This was a long struggle, but worth the effort,” said Nat King Cole, a maintenance technician who serves as the chapter’s Chief Steward. “If we are going to continue to make improvements to our pay, benefits, and to services, we have to stick together and keep our union strong.”