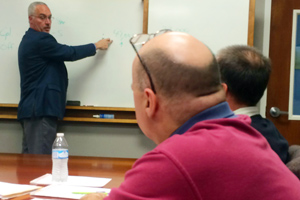 As the union for employees at the Davidson County Sheriff’s Office, Local 205 has been aggressive about improving the pay and training for corrections officers.

After a consistent effort by SEIU, the DCSO revised a policy related to the training program for newly-hired corrections officers. Now, their probationary period begins when the training period ends. This is projected to help make new officers safer and to help retain good officers.

The policy change went hand-in-hand with a restructuring of the corrections officer pay scale which SEIU had input on during the city's overhaul of the Metro pay plan.

“We were glad to work with Sheriff Hall to come up with a way to increase pay for new and existing officers, and at the same time, expand the training program which should help keep us safe on the job,” said corrections officer and union steward Robert Gilmer.