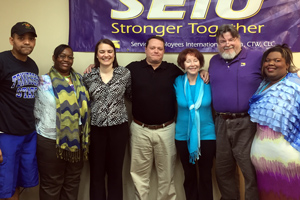 We are thrilled to report that after the votes were counted, ALL of the candidates endorsed by Local 205 in Nashville's local races won their elections!

In the Metro school board races, our endorsed candidates Jill Speering, Christiane Buggs, and Amy Frogge won by huge margins while Will Pinkston held on to his seat by a slim margin of only 36 votes!

The school board races were unusual in that national political organizations had spent hundreds of thousands of dollars in "dark money" to try and change the makeup of the board to become more pro-charter - an effort that failed miserably. "These special-interest groups who tried to come in and hijack our school board learned an expensive lesson thanks in no small part to the efforts of union members who live and vote in the school district," said Freda Player, Local 205's political director. "The most important issues to our members who work in Metro schools are pay, morale, and their rights on the job and the candidates we supported have repeatedly shown that all of these are crucial to getting Metro schools back on track."

Even before the election campaigns ramped up, SEIU members in MNPS had been very pro-active in school affairs. They attended all of the interviews during the search for a new director of schools, they supported the hiring of Dr. Shawn Joseph, and they persuaded the school board to pass a policy laying out guidelines for how the new director should interact with employees and their organizations like SEIU. The union also has a representative on Dr. Joseph's transition team and have been bringing employee issues to his attention. "Our school leaders have been very strategic over the last year and that is starting to pay off," Player said. "We are all looking forward to deepening our relationship with Dr. Joseph and the new school board so that we can ensure that MNPS support staff are paid what they're worth, that they get dignity and respect on the job, and that they have the tools at their disposal to make Metro schools as great as we all know they can be."

We congratulate all of our endorsed candidates, our members and their families who voted for them,  and we especially thank our Member Political Organizers who did the hard work of campaigning to elect this slate of pro-labor candidates to office.