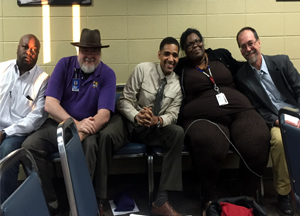 Some staff & members of Local 205 celebrate the passage of a new labor policy by the Metro school board.[/caption]

After years of political and legal wrangling with the Metro Nashville public school district, SEIU Local 205 has come to an agreement with the district that brings an era of conflict and controversy to a close.

As reported by The Tennessean, the MNPS school board unanimously passed a policy which says that the district will recognize MNPS workers’ right to join and assist employee organizations like SEIU and for the director of schools to make good faith efforts to meet and confer with the organizations. The new policy also paves the way for developing a consistent forum to address employees’ concerns and recognizing their rights.

“The new Board policy gives us the opportunity to reestablish a positive partnership with MNPS,” said Brad Rayson, president of SEIU Local 205. “This is a fresh start between the union and the district and we are looking forward to being part of the discussion on how to make Metro schools the best they can be for students, community and employees”.

The new policy brings to an end a protracted legal battle that began when former director of schools Jesse Register voided the district’s labor policy. The adoption of this new policy ends the appeal process which could have taken the case to the Tennessee Supreme Court.