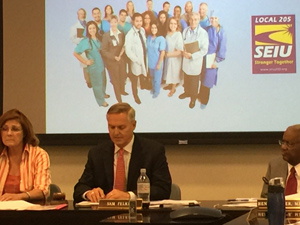 The Board of Health discusses a presentation from SEIU members about the Health Department's work rules and pay plan.[/caption]

At their March meeting, the Board of Health adopted a new pay structure that restores hundreds of Health Department employees into a stepped pay plan and removes them from “open range” classifications!

SEIU has made no secret of opposing open range structures in Metro and we included that in the Union’s presentation to the Board of Health. Many of the Health Department employees who will have their steps restored will also see pay increases under this new plan.

Despite claims to the contrary, research shows that open range/merit pay structures do not improve performance for public sector employees and often do serious damage to morale. In recent years in Metro Government, open range plans have not been well-funded and the processes the city uses to determine who gets what is vague and inconsistent. And in the private sector, open range/merit pay structures (which are used nearly universally in the U.S.) have frequently been used to play favorites or to discriminate against women and minorities.

A struggle against open range in Metro Government is going on as Nashville Public Library employees push back to stop an expansion of open range classifications in their department.