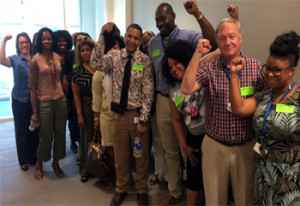 Workers from across the Metro Public Health Department came together to stop controversial changes to the department’s Civil Service Rules which would have weakened employees’ rights and impacted service to the public in Nashville.

When the Board announced that it was considering making changes to the Civil Service Rules, SEIU members formed a committee and members developed their own proposals which were submitted to Management. While some of these initial proposals were adopted, administrators then submitted a series of controversial changes which would have a major impact on Metro employees' rights. Union members pushed back against management's controversial proposals by turning out in large numbers to board meetings, including a public hearing. Union members had already submitted their own suggestions for rule changes and they then developed a Powerpoint presentation which SEIU proposed to the Board of Health at the public hearing. SEIU's recommendations had a major impact on the Board’s deliberations and the union also presented the board with petitions signed by dozens of Health Department employees across all divisions and worksites.

“I am so proud that my co-workers were active throughout this entire process,” said Mia Jackson, a program specialist. “We met off the clock on our own time to go through the entire Civil Service rule book, we researched what the administration was proposing and we even submitted our own proposals.”

“I think what really swayed the Board of Health was the participation by employees and the huge turnout the Union organized for the board meetings,” said Thereasa Howse, a program supervisor. “I have worked for this department for over 20 years and I have never seen staff so engaged in what the department was up to. I truly believe that we were effective because of our strength in numbers and our attention to detail."