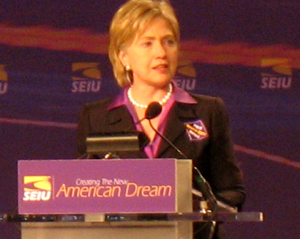 (Nashville)—After members conducted a rigorous endorsement process for the past several months, the Service Employees International Union (SEIU) today endorsed Hillary Clinton for president, calling her a leader who will stand up for the working moms and dads building a movement to secure a better future for their families.

“Hillary Clinton supports working people by supporting raising the minimum wage, expanding and strengthening overtime rules, and protecting our retirements,” said Rosa Lee of Nashville and a Local 205 board member. “She stands with us on the issues that matter to our families the most.”

“The members of 205 are proud to support Hillary Clinton for president,” said local President Doug Collier. “Hillary Clinton will continue to support the bargaining rights of union workers.  She has proven her support of union workers by being a co-sponsor of Employee Free Choice Act.  She will work the raise the income for hardworking Tennesseans and close the gap of income inequality.  We cannot afford four years of policies that will hurt working families while lining the pockets of big corporations.”

SEIU’s national months-long member engagement process included a 1,200-member conference in March, three national tele-town hall meetings in which more than 80,000 members participated, three national member polls from the fall of 2014 through the fall of 2015 and more than 200 local executive board debates and discussions with thousands of local union officers and elected member-leaders.

“Hillary Clinton has proven she will fight, deliver and win for working families,” said SEIU International President Mary Kay Henry. “SEIU members and working families across America are part of a growing movement to build a better future for their families, and Hillary Clinton will support and stand with them. This movement for economic, racial, immigrant and social justice is poised to turn out to vote in November with their families and communities and keep pushing elected officials to deliver once in office.”

SEIU’s 2 million members will join hands with community partners in a broad movement for economic, social, immigrant and racial justice. Along with the 64 million people who work at jobs paying poverty-level wages, they will be a powerful force during the 2016 elections. Hundreds of thousands of face-to-face and door-to-door contacts, millions of phone calls, robust digital engagement and other activities to get out the vote will counteract the efforts of billionaires and corporations to elect leaders who would answer only to the wealthy few.

The Service Employees International Union (SEIU) unites 2 million diverse members in the United States, Canada and Puerto Rico. SEIU members working in the healthcare industry, in the public sector and in property services believe in the power of joining together on the job to win higher wages and benefits and to create better communities while fighting for a more just society and an economy that works for all of us, not just corporations and the wealthy.