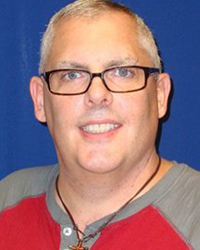 Gary Hughes, a unit secretary for the oncology unit at Methodist Medical Center was named “MMCer Of the Month” in August.

Gary, who lives in Oak Ridge, served in the United States Navy for ten years and is a member of the Ridge Church. He has been with Methodist Medical Center since 2012 and has been a member of SEIU Local 205 since he started working there.As a unit secretary, Gary provides assistance to hospital visitors, patients, and staff as well as handling administrative duties for the oncology unit.

Gary is described by manager Sherry Barnett as "a delight to work with." "Gary comes to work early and ready to work,” Sherry says. “He has a smile on his face, a can-do attitude, and I hear compliments about his work ethic from other departments. He goes above and beyond every day and you can count on him."

The employee who nominated Gary says, "he is an asset to this hospital and in particular oncology. He anticipates problems prior to them becoming an issue and not only brings it to management’s attention, he also brings a potential solution.”

"The nurses really love him,” Sherry added. Another co-worker pointed out one of Gary’s other endearing attributes, “you can hear him smile on the phone.”

When asked about receiving the employee of the month award from Methodist, Gary was thrilled. "I'm extremely proud to work on Four West at Methodist,” he said. “And I’m honored to work with such excellent co-workers!”