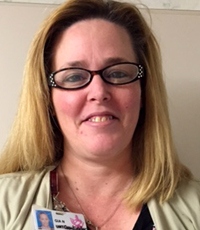 We all know that sometimes bad things happen to good people. For the employees at Methodist Medical Center in Oak Ridge, Tennessee, it’s a good thing they have a Gia.

Gia Normille is a HUC (Health Unit Coordinator) on the pulmonary floor at MMC. She has been at Methodist since 2010, and her duties include answering call lights, gathering and organizing patient charts, and facilitating communication and flow for the doctors and staff. But Gia can always be found doing much more, little things that make a huge difference to the patients and their families. At any given time, she can be seen carrying a cup of coffee or a warm blanket to someone who maybe isn’t feeling well.

When Gia finds out that one of her union brothers or sisters is having a hardship, she spearheads a fundraiser to get help when it is needed the most. Employees from every corner of the hospital respond by bringing in food, from professionally decorated cupcakes, or up to 10 gallons of chili, carloads of chips and cheese, and many other mouth watering items. Then the employees come together for lunch, make a donation, and finer food can’t be found anywhere in the South.

When asked why she works so hard to organize these fundraisers, Gia simply says “People need help. I hope that if I ever need help, someone would do the same for me.”

Gia is married to husband Michael, and they have three children. She used to work at another hospital, but moved to Oak Ridge and transferred to MMC. One of the deciding factors in coming here was because of the Union. “I didn’t have the support at the other hospital like I have here," Gia says. "The members of SEIU 205 are like family - I know they have my back and we support each other.”

In addition to all she does on the job and for her family, Gia also does her best to educate her co-workers about the benefits of joining the union. “I know many new employees really don’t know much about what the Union does," she says. "I have been talking to them and explaining that we wouldn’t have the benefits that we have without a union contract. And I love that we have stewards everywhere, looking out for us. I recently had a conversation with a new RN, and signed her up! It was my first time getting a new member, and I loved it!”