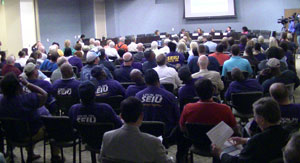 After a nearly two-year struggle, we are happy to report that the Metro Employee Benefit Board has rejected any cuts to the pension or retiree health benefits for Metro employees!

At their meeting on Oct. 6, the Benefit Board weighed the proposal from Mayor Dean's Study and Formulating Committee as well as the input from SEIU and decided that it was unfair for firefighters and police to be allowed to keep their medical coverage upon reaching Medicare eligibility while the rest of the city's employees would be cut off from health insurance when they retired. The Benefit Board voted against the Study Committee's recommendation, despite a major P.R. push by the Mayor and his allies to convince the public of a "crisis" in unfunded liability for employee benefits which SEIU debunked.

Unless the new mayor or Metro Council decides to revisit this issue, major changes to employee benefits are now effectively dead. You'll remember that SEIU was able to get any cuts to the employee pension stopped over the summer by an aggressive campaign against the Pew group and the Dean Administration. That victory was only possible because our members turned out and they were vocal about protecting the benefits they earned.

Meanwhile, the Benefit Board did vote in favor of a new lump-sum payout option that the union supports. There are pros and cons to this new option, but the important thing is that the final decision about whether to use it is up to the employee and it is not mandatory. We urge city employees to get more information about this benefit as details are rolled out - assuming it gets approved by the Metro Council.

Thank you to our members who turned out to meetings and talked to their elected officials about these issues and helped secure a major victory. Please tell your non-union co-workers that the reason their benefits are secure is because your Union fought hard to protect them!