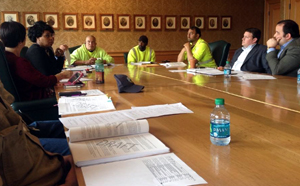 Employees and administrators discuss the new policies being proposed for employees of the City of Chattanooga.[/caption]

Beginning in September, Chattanooga city employees will have a new set of policies and procedures that were developed in partnership between city officials and SEIU Local 205. This is the first time that workers in all departments will have universal rules to follow and the administration will have a clear and consistent process to handle a variety of situations. This is an historic moment for organized labor in Chattanooga in which city employees were able to participate in their conditions of labor and is a testament to the strength and persistence of SEIU members.

The first draft of the new policy and procedures manual was nearly 200 pages and was divided into three sections. Union members sat on each of the subcommittees to represent workers across the departments including Sharron Pryor, Steve West, Alonzo Strickland, Jeff Templin, Nancy Nason, Cyndy Workman, Terry Davis, and Robert Ledford. There were also a handful of other diligent and dedicated union members who spent time with the document and added their input and perspective to the process. Each of these people spent hours reading and responding to all of the issues in the document.

After an eighteen-month discussion process with multiple meetings with the subcommittees and administration, the handbook went to the city council for a vote. During the hearing process, a few points were changed and many of the subcommittee members were present to testify on several points that workers had concerns with. Then SEIU local president Doug Collier came to Chattanooga to discuss the points with the administration. All parties agreed that workers will continue to meet with the administration over the next six months with the intent of changing the current language, and then return to the city council with amendments.