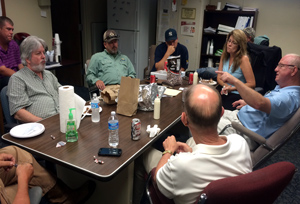 The Negotiating Committee and local president Doug Collier (right) go over proposals for the new agreement.[/caption]

The Union’s contract committee at Nashville Electric Service (“NES”) completed negotiations on a new five-year agreement between SEIU Local 205 and the Power Board which includes dozens of improvements for workers, including:

For more details about the agreement, contact one of the chapter officers or bargaining team member.