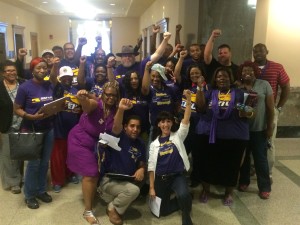 Members working for Metro attend (and speak out at) the public hearing on the Metro budget.[/caption]

"They've been throwing everything and the kitchen sink at us all year and we've not only survived, we've thrived," says Antonio McKissack, a water maintenance leader who serves as the chief union steward for Local 205's Metro chapter.

Antonio, who his friends call "A.T.", is talking about the victories that SEIU has faced on several fronts in 2015. Thanks to the organization and activism of its members working in Metro Government, the union has protected the pension, stopped radical changes to the pay plan, and helped push forward pay increases for all Metro employees.

The threat to employee benefits began over a year ago when the mayor's Study & Formulating Committee defied their mandate from the Metro Council and began a "full review" of employee pension and health benefits.  For that, the committee lined up the Washington DC-based Pew Trusts, which is funded by former Enron executive John Arnold. Arnold's project has caused disruption to local and state pension systems across the country, but thanks to big turnout by workers at the Study & Formulating Committee meetings and an aggressive lobbying program, SEIU has stopped any cuts to the pension for current and future employees.

Having lost the fight on the city pension, which is one of the most profitable and well-funded in the country, the committee turned its attention to the employee medical plan. And yet, despite a misleading media campaign about the Metro plan's “unfunded liability”, SEIU has stopped any major cuts or changes to the health insurance benefits for employees. Meanwhile, changes to future retiree health plans may yet still happen depending on the actions of the Benefit Board and the council over the summer and fall. Also this year, SEIU supported the first expansion of employee benefits in years; the domestic partner benefit, which passed the Metro Council overwhelmingly.

While the threat to employee benefits played out, another study was going on related to Metro employee pay. A comprehensive study of Metro employee pay and benefits, which was done by consulting firm DeLoitte, was the first of its kind in over a decade and included surveys and other analysis that resulted in several significant findings - some good for employees, some not so good. One positive recommendation from the pay study was to increase the salaries of jobs which were "in crisis" because they were 20%  or more behind their "peers" (the market standard for that particular job). SEIU helped get some of those job classifications onto the consultants' radar because of our members' research and recommendation. As a result of SEIU members' activism, workers in the Health, Water, and 911 departments as well as corrections officers in the DCSO received extra pay increases.

Meanwhile, another recommendation of the DeLoitte pay study would have reclassified many existing Civil Service employees to become “open-range” employees, which means they would no longer be eligible for step raises. SEIU opposed expanding an open-range (also known as “merit pay”) system in Metro for several reasons—a lack of consistent funding, the arbitrary nature of merit pay, and because most research has shown that merit pay does not improve performance in the public sector. SEIU would not budge on our opposition to this proposal and the Dean Administration ultimately abandoned it.

When it came to employee pay, this year's Metro budget included several improvements for city employees, thanks in no small part to the strategic and consistent activity by members of Local 205.

All city employees received a 2.5% cost of living (COLA) raise. Employees who were eligible for increment ("step") raises received them, which represents an increase of between 1-3%. Employees classified as "open range" received between 0-3% and eligible employees in the Davidson County Sheriff's Office received compression pay.

In the run-up to the vote on the budget, SEIU members met with council members to talk to them about the love they have for public service as well as the struggles they face. They also educated the council about the value and importance of a strong employee benefit system that rewards loyalty and service to the public.

“I am so proud of my brothers and sisters for their hard work and persistence,” says McKissack. “Our stewards and activists rose to the challenge and worked hard to protect their departments and get good raises for all city employees. We still have some things to get fixed for next year, but we are on a roll.”