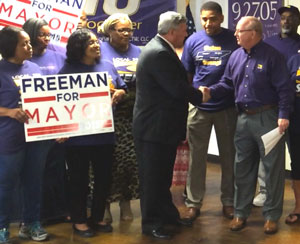 SEIU Local 205, a labor union which represents thousands of Davidson County workers in the public and private sectors, endorsed Bill Freeman for Mayor of Nashville on Tuesday.

“I am deeply honored to receive the endorsement of SEIU Local 205,” Freeman said. “I hope this endorsement will serve as a signal to those members, their families and other working people in this community that my candidacy is deserving of their support.”

“Bill Freeman was the obvious choice for SEIU Local 205’s endorsement,” said Local 205’s political director, Freda Player. “His record of excellence both in the private and nonprofit sectors make him uniquely qualified to be the next Mayor of Nashville.”

“Our members interviewed the candidates for Mayor and chose Bill Freeman because he seemed the most committed to addressing income inequality and the struggles that many working families in Nashville still face, despite the prosperity that has happened for some,” said Local 205 President, Doug Collier. “We look forward to working with Bill Freeman on finding solutions to the problems that still keep many of our family and friends from achieving the American Dream.”

Lilldeus Russell, a paraprofessional and member of Local 205 who was heavily involved in the interviewing process for the union, explained why she and her fellow union members endorsed Freeman. “He will keep working people’s issues front and center throughout the campaign,” Russell said. “It is important that working class families not be left behind while many in Nashville have prospered and Bill Freeman gets that.”

“SEIU members are engaged citizens who work hard in the public service and who live, work, and worship in Davidson County,” said Freeman. “It is gratifying to me that our message of commitment to improving our schools, battling traffic problems, and focusing on public safety helped them decide to endorse our campaign.”

“I have a vision for the future of Nashville that includes dignity for all workers, regional mass transit to help solve our traffic problems, a full commitment to excellence in our schools, and proper funding for public services so that Nashville’s quality of life remains strong,” said Freeman.

The election for mayor is on August 6, 2015. Early voting begins on July 17 and continues until August 1. For voting locations and times, contact the Davidson County Election Commission at 615-862-8815.