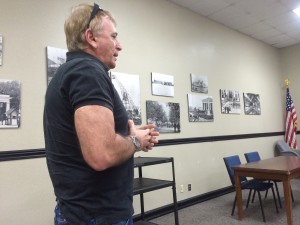 911 dispatcher Rick Beasley, who serves on the union's bargaining committee, addresses the Civil Service Commission about the employee pay plan.[/caption]

A comprehensive study of Metro employee pay and benefits, which was done by consulting firm Deloitte, was the first of its kind in over a decade and produced several significant recommendations - some good, some bad - and SEIU Local 205 was there every step of the way to make sure public employees were protected.

One positive recommendation from the pay study was to increase the salaries of jobs which were "in crisis" because they were 20%  or more behind their "peers" (the market standard for that particular job). SEIU helped get some of those job classifications onto the consultants' radar because of our members' research and recommendation. As a result of SEIU members' activism, workers in the Health, Water, and 911 departments as well as corrections officers in the DCSO received extra pay increases.

Meanwhile, another recommendation of the Deloitte pay study would have reclassified many existing Civil Service employees to become “open-range” employees, which means they would no longer be eligible for step raises. SEIU opposed expanding an open-range (also known as “merit pay”) system in Metro for several reasons—a lack of consistent funding, the arbitrary nature of merit pay, and because most research has shown that merit pay does not improve performance in the public sector. SEIU would not budge on our opposition to the merit pay proposal and the Dean Administration ultimately abandoned it. As a result, no pay study recommendations that were detrimental to city employees passed the Civil Service Commission or went on to the council.

The union will continue to work on implementation of several other positive recommendations of the pay study moving forward into the next administration and council.