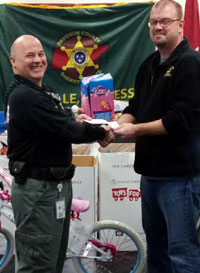 SEIU steward Robert Gilmer (left) presents Dan Weikal with a $500 contribution from the Metro chapter to the DCSO’s “Toys for Tots” campaign.[/caption]

SEIU Local 205 was proud to be a co-sponsor of The Motorcycle Run, a fundraising event held by the Davidson County Sheriff’s Office to raise money for Toys For Tots.

Metro chapter union members voted to contribute $500 towards the event.

“I am so thankful and proud to be a part of this great cause, which would not be possible without committed people who believe in our mission” said SEIU member Jack Byrd, a DCSO corrections officer who spearheaded the effort.

This was the highest grossing year for the event, doubling the amount that was raised last year. Over 2100 toys and $13,000 was raised by the DCSO with SEIU’s help and all the money stays in Middle Tennessee with 100% going to Toys for Tots.

Funds that were raised didn’t just go to toys. Coats, clothing, shoes, and hygiene items were also purchased. The donation from the SEIU Metro chapter was the campaign’s second largest gift received by a single contributor.