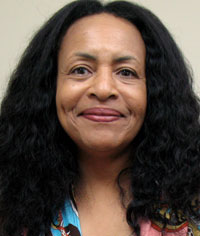 Exie Harrington may work at a library, but when it comes to union activism, she sure knows how to make some noise!

Exie, a circulation assistant at one of Nashville’s 20 branch libraries, joined SEIU back in 2012 and immediately tried to get more involved to build her union. Whether it was attending meetings or signing up her co-workers, Exie flew the union flag every day on the job—even though her worksite was not a particular “trouble spot” with a lot of employee grievances or issues.

It wasn’t long though, before Exie was directly affected by a new directive from the State of Tennessee. Governor Haslam issued new “navigator rules” as political retaliation against the Affordable Care Act which could have fined library employees, as well as healthcare workers, pastors, volunteers, and other public employees for assisting people who were trying to access information about the ACA. “In theory, if someone came to my library and asked where they could sign up for Obamacare, and I pointed them to information online, I could have gotten a fine,” Exie explained. “We show patrons every day how to sign up for housing and other public assistance and we have never had problems, but when it came to Obamacare… well, lets just say that there were some people who wanted to see it fail and they were willing to bully people to make it happen.” Exie was a co-plaintiff in a complaint made in Federal court against the state in a case known as “Harrington v. Haslam” and ultimately, the Governor’s office was forced to settle with plaintiffs in what was clearly a politically-motivated overreach and Haslam’s new navigator rules were suspended. The case set a national precedent that cleared the way in other states to prevent right-wing governors from blocking access to a lawful federal program.

For her courage, Exie was nominated for and won the 2014 Intellectual Freedom Award from the Tennessee Library Association—an award that salutes leaders in free speech and intellectual freedom. “This was a highlight of my career, but the real honor was making sure that people who need affordable healthcare can get it without interference from immoral legislators.”

Exie also serves as Assistant Chief Steward for the union’s Metro Government chapter and she’s an alternate on the local’s Executive Board.