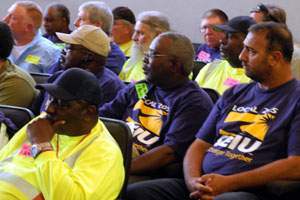 After SEIU led city employees in a massive rally at the Chattanooga City Council to address inequities in the city employee pay plan, the human resources department has extended an invitation for Local 205 to nominate workers to serve on a joint committee that will be redesigning the city pay plan in the coming months.

The Union wants a pay plan similar to the old stepped pay plan.  The old plan recognized the value that workers gain after years of service to the city.  The union members serving on the pay plan steering committee are committed to helping the city restructure the pay plan so that it once again provides opportunity for advancement along with a decent standard of living.

Once the committee has met, members of the committee will be reporting back to their coworkers and fellow union members and calling for feedback and input from everyone.