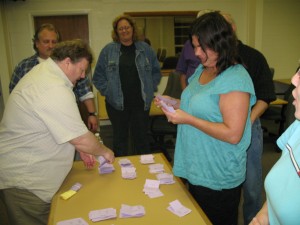 After many obstacles and challenges, workers organized with SEIU Local 205 ratified a new three-year agreement with their employer, Methodist Medical Center in Oak Ridge, TN.

A major sticking point this year was health insurance, when the company attempted to impose a 23.68% increase in employee health insurance contributions. This was considered unacceptable by the bargaining committee and even invited a legal challenge by the union. But by standing together, workers were able to negotiate improvements - not just in health insurance, but in wages and their other benefits, including:

"This was only the second time we've done 'limited bargaining' and yes, it was frustrating at times, but in the end, cooler heads prevailed and the company did the right thing by workers," said Jeff Massey, a respiratory therapist who served on the union's bargaining team.

"I salute the bargaining team, the union representatives, and my co-workers for sticking together through this one," said Gary Hughes, a unit secretary. "I have a feeling the next contract will be tough as well, but as long as we have strength, solidarity, and smarts, we will continue to make improvements so that we can continue to deliver top-notch health care to East Tennesseans."

The new agreement, which passed by a vote of 92% by union members, expires in October, 2017.