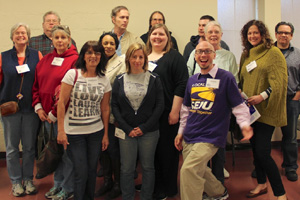 SEIU Local 205 members working in public libraries in Nashville and Chattanooga have been organizing to ensure fairness and economic security for them and their co-workers over the last year and have achieved no small amount of success by standing together.

SEIU members working in the Main library in downtown Nashville - who pay over $100/month to park where they work - have been campaigning for nearly a year to address their transportation issues. Union members launched a petition drive and a lobbying campaign of the library director, the board, and city officials. We are happy to report that a free shuttle for employees has been added along with more frequent trips for staff reporting in at different times. “This is a great first step to addressing the parking situation in the main branch,” says Bridget Radford, a shop steward. “The new option has been popular for many staff and we hope to eventually make sure that everyone who wishes to drive to work at the Main library can afford to so.”

Meanwhile, parking reform was also a goal for SEIU members working in the Chattanooga downtown library. Like Nashville, employees had to pay excessive parking fees to park in the lot that their workplace sits on. After workers there passed around a petition with dozens of signatures, SEIU reps raised the issue with city officials and the Mayor’s office. Starting in April, workers now are able to park for free at City Hall only a few blocks away. “Inclement weather presents a challenge sometimes, but I would much rather walk a couple of blocks and save some of my hard-earned money in high parking fees,” says Robert Hart who works in the downtown library.