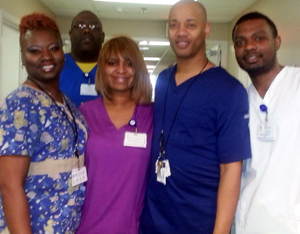 Union members working at Bordeaux Long Term Care are sticking together as they face a transition to a private sector employer.[/caption]

After weeks of meetings between Local 205, Metro officials, and executives at three different private companies, agreements were made to protect the job security and employee rights of hundreds of healthcare workers at the Bordeaux Long Term Care facility and the Knowles Home for Assisted Living in Nashville.

The agreements came out of a new deal that Metro Government brokered with Signature Healthcare, Ed Street Company, and Autumn Assisted Living Partners to transition long term care services away from government to the private sector, a trend that has been happening nationwide for decades. Of all the major metropolitan areas in Tennessee, only Nashville still operates nursing homes. Under the deal, which was approved by the Metro Council in March with SEIU’s support, Signature will manage and operate the Bordeaux Long Term Care facility while Autumn will operate Knowles.

SEIU was able to negotiate a “memoranda of agreement” with Signature Healthcare to ensure that workers and patients at Bordeaux were protected in the transition and that they continued to have a voice through their union.

“Having this kind of an agreement with a private sector company is very rare and a big win for our members,” said Brad Rayson, Local 205’s representative who helped bargain the various agreements. “Even though the facilities changed from government hands to private operators, we were able to keep salaries and benefits consistent with what workers had as Metro employees, we protected folks pensions who were near retirement, and we protected jobs.” An estimated 90% of current Bordeaux employees will be offered jobs with Signature while the remaining staff will be offered either another job within Metro or a severance package to help while they find new employment. Signature will assume management of the BLTC facility on May 1, 2014.

SEIU also negotiated that Signature recognize the union as the employees’ bargaining representatives as well as the attendant rights and responsibilities that come with union recognition. “We get to keep our union and our seat at the table,” said Berry Woods, a phlebotomist at Bordeaux. “Everything is negotiable, but that is not. We are glad to remain a union shop so we can continue to fight for the best care for our patients.”

Meanwhile, at Knowles Home, all current employees will be offered their jobs and they will also be entitled to the severance package. Autumn will officially assume management of Knowles on July 1, 2014.