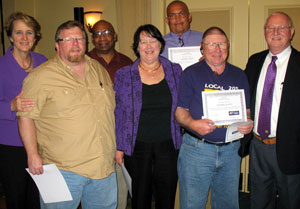 In keeping with SEIU's Member Strength program, Local 205's "Shining Star" awards  were given to members who went above and beyond the call of duty in service of their union in 2013 by putting in the time to help their co-workers.

Whether it was through attending grievance hearings, signing up new members, working on political campaigns, or lobbying elected officials, our Star Activists set the standards for participation and commitment across our union. We proudly commend them for their hard work and their example.

Congratulations to this year's Shining Stars!