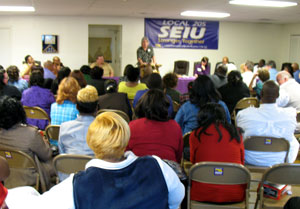 SEIU members from across Tennessee gather for the 2013 Local Convention.[/caption]

On November 2, hundreds of Local 205 delegates, alternates, activists, and rank-and-file members came together for the Local Convention in Nashville to set the union's agenda and its leadership for the next three years.

At noon, the Convention was called to order by Local President Doug Collier and was followed by Vice-President James Bradley who led the membership in a prayer.

After going over the day's agenda and a credentials report, Chapter Reports were given in which SEIU member leaders from across the state talked about the victories their chapters have won over the last three years and the challenges they face moving forward.

More reports followed on Politics, Organizing, Finances, and the Member Leader program and those led into a special presentation by Mary Kay Henry, the International President of SEIU who traveled from Washington D.C. to be with us. President Henry gave an inspiring presentation on how we must try to focus our efforts into rebuilding the middle class by lifting up low-wage workers across the entire economy-especially in the service industry. Doug Collier gave his president's report, which echoed Henry's sentiments with a presentation that showed how in Tennessee, working people and the middle class continue to lose ground while the richest CEO's and the top 1% continue to make even more and more money at our expense.

The Election Committee convened and accepted nominations for officers and executive committee members, which will serve for the next three years. Those who were nominated without opposition were Local President Doug Collier, Executive Vice-President James Bradley, Secretary-Treasurer Shawn Nevil, and Vice-President of Organizing Brenda Shields. These officers were then elected by acclamation and their new terms will begin on January 1.

In the contested races, there were two nominations for Recording Secretary (Michelle Hardy and Amy Wheeler) and five nominations for the three available Trustee positions (Kay Golden, Darlene Lutton, Nancy Orren, Lill Honey Russell, and Stephen West). There will be an election on November 25 to elect a Recording Secretary and three Trustees and Local 205 members will receive information on candidates and polling locations in the mail or online here.

After the Convention was adjourned, members and their guests re-convened at the Opryland/Airport Holiday Inn for the Star Activist Dinner. The Star Activist Dinner is an annual event that celebrates and honors Local 205 members who go above and beyond to help their co-workers by being active in their union. Our Shining Stars received awards based on the level of their participation on things like handling grievances, lobbying elected officials, and signing up members, among other tasks important to the union. Stephen West of the Chattanooga chapter was the recipient of this year's Benson-Johnson Award and several members were awarded with SEIU jackets for signing up ten or more members over a year-long period.

Elected officials from Nashville and Chattanooga were also present to share in the festivities, which ended with dinner and dancing.

Thanks to all who participated in our largest member event in years and to those who helped make it all happen. You can see some pictures and videos from the Convention and the Star Activist Dinner on the Local's Facebook page.