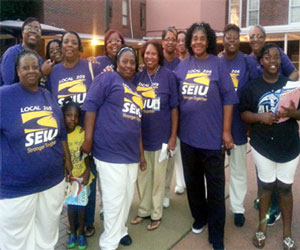 SEIU members celebrate the passage of a resolution by the Shelby County School Board recognizing their union rights.[/caption]

By a vote of 16-4, the Shelby County school board voted on Tuesday to support a resolution that recognizes a half-dozen unions – including SEIU Local 205 - as the representatives of approximately 18,000 public employees working for the recently formed Shelby County Unified School District.

“We are so glad to continue to have representation by our Union,” said Brenda Shields, a cafeteria manager who has been working in Memphis schools for 28 years. “There are a lot of issues facing school employees and it is important that employees are able to get these problems addressed.”

“If we are not given the training and the tools we need to do our jobs and our concerns aren’t taken seriously by administration, then we can’t provide the best educational environment that our children deserve”, said Clannon Williams, a plant engineer. “We are glad to continue to have a voice on the job.”

“This is a step in the right direction for Shelby County’s public employees and we look forward to working in good faith with school administrators to resolve employee issues,” said Doug Collier, president of SEIU Local 205, which represents cafeteria managers and plant managers in the district. “I want to offer my sincere thanks to the Baptist Ministerial Association for their advocacy as well our union brothers and sisters from AFSCME Local 1733, UAW Local 3036, the Memphis Shelby County Education Association, and the Craft Employees Association – all of whom demonstrated amazing solidarity throughout this long struggle.”

The problems for school employees began nearly two years ago when the Memphis City School Board surrendered its charter to operate the city’s school system, eventually forcing the city schools and Shelby County Schools to merge into a new Unified School District. While the city schools had a long history of working with organized labor, the county schools did not, causing much controversy and confusion for employees.