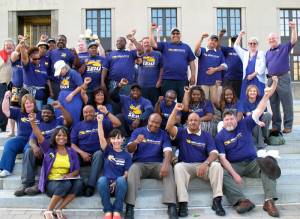 Some of the SEIU members who rallied at the Metro Courthouse in support of a new budget proposal that puts workers first.[/caption]

After a sustained campaign by SEIU members in Nashville, the Metro Council passed an operating budget for 2014 that gives city employees an across-the-board pay increase of 1.5% plus the return of step raises (also called "increments").

Step raises, which are mandated in the Metro charter and the city's pay plan,  have been frozen for the last five years and has put many employees behind financially as well as having an impact on promotions and retirement calculations. SEIU has been campaigning for increments and an across-the-board raise for months at the Civil Service Commission, the Metro Council, and the Mayor's office. Members have contacted council members on the issue and have spoken publicly in support of improvements. And on May 21, dozens of SEIU members from different departments joined with firefighters and police officers at a Rally on the Courthouse steps to support a modified budget proposal from the Mayor.

After the employee Rally, SEIU members went inside to lobby their council members and attend the Public Hearing on the budget. The Local's president, Doug Collier, spoke at the Hearing in support of the modified proposal being considered by the Council as a great first step, but that it be part of a larger discussion about how to improve pay, benefits, for city employees and services to the public. Social worker and SEIU member Russ Anthony spoke with WKRN News 2 about the new budget proposal and the way forward for Metro employees.

Our thanks go out to all our members who attended the Rally and Public Hearing and to the members who were not able to attend but have contacted their elected officials on the issue. "This new budget proposal would not have happened without the hard work done by SEIU members and our allies," Collier said.