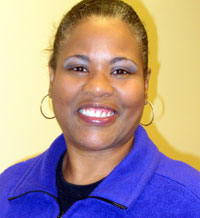 When Vanessa Robertson reports to work every day at Metro General Hospital in Nashville, she isn’t just showing up so she can collect a paycheck. “A job is somewhere you show up every day so that you can have money to pay your bills,” Vanessa says. “This is more than just a job to me. I see it as my ministry. After all, Jesus took care of the sick and the poor and I can do a lot worse than to follow His example.”

Vanessa is a labor and delivery technician at Nashville’s safety net hospital, Metro General at Meharry. She assists doctors and nurses with OB/GYN patients and helps to bring new life into the world every day. It’s this sense of compassion and hope that led Vanessa to SEIU Local 205. She joined the union back in 1994 when she came to General and even though she’s a working mom, she still finds the time to be active in the Union. Vanessa has served as a shop steward since 2000 and has been on the union’s Bargaining Committee since 2003. “I want to be part of an organization that respects the voices of employees and helps them to get the dignity, respect, and justice they deserve at work,” Vanessa says.

As budgets in Washington and here in Tennessee continue to shrink, Vanessa often worries about what will happen to General, which relies heavily on subsidies—but not just because it will affect her own life. “We are so important to the community and we help so many people who can’t afford health insurance and treatment—I pray that Nashville General can weather this storm. In the meantime, I will continue to help my patients and my co-workers to the best of my God-given abilities by participating in my Union.”