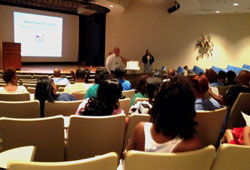 SEIU members gather for a Q&A session on their first union contract at St. Francis Hospital.[/caption]

After many months of organizing and negotiating, workers at St. Francis Hospital in Memphis turned out to vote for their first union contract.

The new contract applies to service and technical employees and is a three-year agreement. Included is a wage increase of 7.5% over the term of the agreement, a grievance procedure that allows a neutral, third-party arbitration, a limit on increases to health insurance premiums, and provisions on job security, seniority recognition, and job bidding.

The Union’s Bargaining Committee, made up of Jackie Dennis, Cliffrie Morgan, Donald Dotson Sr., and Ruby Parson had recommended a 'Yes' vote to the membership. In the end, 96% of SEIU members voted Yes.

“Negotiating a first contract is a very tense time and it can sometimes be very frustrating, but I am really proud of the Bargaining Team," said Doug Collier, President of SEIU Local 205. "The Committee members did an excellent job and their co-workers should be proud of them".