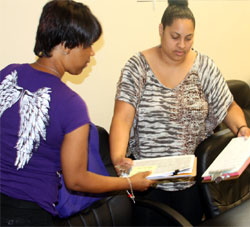 SEIU members were thrilled to have helped elect Amy Frogge to the Metro School Board in the election’s biggest upset. Frogge, a public school parent, PTO president, and attorney, ran against a corporate executive who raised over $115,000 (and counting) and a well-known former Metro Council member. SEIU was the only organization to endorse Frogge, who won in a landslide even though she was outspent by nearly 5-to-1.

Tonya Darvin, an MNPS bus monitor and SEIU member was thrilled to see that her hard work for Amy’s campaign paid off. “I am so glad that we’re going to have some new blood on this school board,” Tonya said. ” We went out in the hot sun in record-breaking heat to talk to voters about the candidates and it was time and effort well spent. We need to move away from the anti-worker policies that have happened over the last year in the schools. Being pro-education means supporting all the people who provide the education. I’m hoping this new school board can move in that direction”.

Lill Russell, a special education assistant in Metro Schools who worked on the union’s campaign over the summer, took some of the election results in stride. “Look I’ve been around politics long enough to know that you win a few and you lose a few,” Lill said. “The struggle that we’re facing in MNPS isn’t going to be over after the polls are closed. This is an ongoing campaign to restore dignity, fairness, and employee rights. This election isn’t going to stop us from continuing to stand up for our co-workers, the taxpayers, and the students.”

Many SEIU members put as much value on the experience they had this summer as they did on the election results. “I’m so glad to have worked on this campaign this summer,” said Arlanders Hunter, an in-school suspension monitor at Maplewood High School. “I had a lot of fun and I learned a lot. Not just about politics, but how valuable my union is in making sure that my co-workers’ interests are looked out for. I plan on getting more involved with my union after this election is over.”