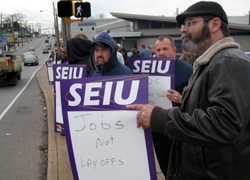 Hundreds of faculty & students rallied against unfair layoffs at NADC.[/caption]

In a ruling by arbitration, two veteran instructors who were laid off by the Nashville Auto Diesel College were ordered back to work with back pay with interest. SEIU Local 205 represented the instructors in their grievance against the company.

In 2011, the Nashville Auto Diesel College laid off two instructors who had seniority over 14 other instructors in their division. According to the collective bargaining agreement between NADC and Local 205, "seniority will govern all layoffs," and yet, NADC still laid them off citing the reason of "their failure to attain Master ASE certification" - implying that they were not qualified to teach. But the instructors had been qualified, the arbitrator decided, because both instructors had been teaching their courses for years. The arbitrator also pointed out that, "instructors hired before January 1, 2006 were not required by the Agreement to complete [...] certification to keep their jobs". Both instructors were hired long before 2006.

As a result, the union's grievance was sustained and both workers are to be made "whole in all respects".