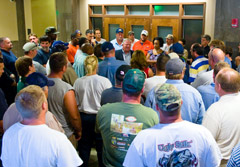 NES workers discuss their concerns at the Courthouse before a Metro Council meeting.[/caption]

“This is one of the best union contracts that our members have ever won and it may be one of the best in any industry in the southeast,” said Shane Lankford, a senior meter technician who also serves as the NES chapter's 1st Vice President, Local 205's Executive Vice President and participated as one of the seven NES bargaining team members.

The contract guarantees a minimum of 10% raise over five years and possibly more depending on the cost of living index. SEIU members also won major new benefits in their health and retirement package, including an improvement in NES retirees’ prescription drug coverage, new coverage for various surgeries and tests, and a comprehensive vision plan that covers workers and their families. Employees also now have an option to take up to 35% lump sum option at the time of their retirement. The Union also won an increase in the uniform allowance.

Members attribute the contract victory to: strong leadership, solidarity, and participation from members throughout the entire process.